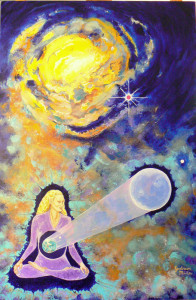 Biorelativity describes the ability of human beings to telepathically communicate with the Spirit of the Earth.  The goal of such communication focuses on influencing the outcome of natural Earth events such as storms, volcanoes and earth­quakes.  The practice of Biorelativity has been ongoing through recorded history and includes such events as Native Americans praying for rain, biblical figures asking for weather changes and other native peoples using ceremonies, such as the Hopi Kachina dance, to influence proper weather conditions for favorable planting and favorable growing seasons.

Practices of Biorelativity are not usually accepted in our logical modern Western World.  This is because the Earth is not viewed as a living spirit in our modern world and thus communi­cation with a non-living being would be considered impossible.

A shift in consciousness has occurred on the planet during the past 25 years.  Some writers see a major marker of that shift beginning in August of 1987, which was called the Harmonic Convergence.  This Harmonic Energy Convergence marked the beginning of the concept that a spiritual evolution is occurring between man’s consciousness and his relationship to Earth and man’s relationship to the Cosmos.  Man was now to be accepted and thought of as interacting with a living planet.  This living planet also has an energetic relationship to the galaxy.  We are now living on this beautiful planet but unfortunately, the entire biological and energy system of the planet, which is called the Biosphere, is now totally dependent on what mankind does and how mankind treats the planet – the environment and other life forms on Earth.

I have been working with the concept of Biorelativity for more than 15 years.  I have described approaches to Biorelativity based on my intuitive connection to my spirit guides and teach­ers, including a higher spiritual fifth-dimensional group of teachers known as the Arcturians.  Recently I have received new information and ideas on how to more effectively use Biorelativ­ity principles to positively influence the Earth.  This new inter­vention is based on two concepts that the Arcturian guides have offered:  the first concept is called the Planetary Cities of Light (PCOL) and the second concept is based on using the Arcturian Planetary Tree of Life for Earth healing

Planetary Cities of Light are designated areas watched over by planetary healers, who have given a specific area that designa­tion. These areas are devoted to holding sacred energy in order to preserve the highest, purest and most spiritual energy fields for the area. This means the areas are committed to environmentally responsible actions and are living and running the areas based on higher energetic principles. These energetic principles are coming from higher energy sources called fifth-dimensional energy.  A requirement for activating and becoming a Planetary City of Light is to have devoted spiritual beings inhabiting the area. They must be willing to work with the city’s energies, including forming energy circles of Light around the perimeter of the area.  This circle of light can be accomplished by using prayer, crystals and energetic visualizations. This will help to insure that all goings-on within the city will be conducted with the highest energy.  This even includes the conducting of social, political and economic business. 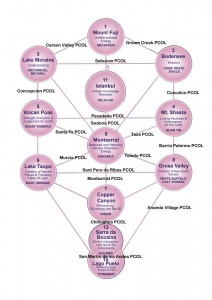 They now refer to the Kaballah Tree of Life in its updated form as the Arcturian Planetary Tree of Life.

This update includes the addition of two solid spheres of energy that have been added to the original Tree of Life.  Addi­tionally, the 12 areas the Arcturians have designated around the Earth are to hold and represent each energetic sphere on the Planetary Tree of Life.  These areas also are augmented energeti­cally through the downloading of etheric crystals into that area.