From January 2015 lecture “Updates in the Ascension” 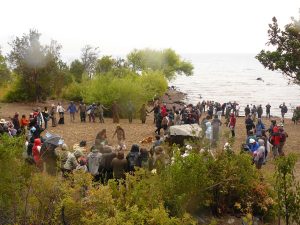 Your physical body is being charged with a new light frequency. Let us go into meditation now as you and I together experience this charge of Omega Light through you that will be so important when the time comes for you to move your body with you to the fifth dimension. This time you will just feel a great lightness and a great feeling of well-being.
…

From the August 2014 lecture “Biorelativity and the Fabric of the Universe”
…
This planet Earth has an accumulation of life force energy and spiritual energy that has created what we call the biosphere. The biosphere is actually a force field of energy around this planet. It is like an aura. It is an energy field that has many features that are similar to the aura of a person. For example, the aura of the Earth contains the life force energy field. It contains meridians. It contains different paths of force fields that are coming from many different sources. These different sources are not yet known to mankind. Let me say that we have been using one such light source. We call this new light for healing, quantum light. It is used for quantum healing. We also call it Omega Light, which is a form of quantum light. Omega Light is a spiritual energy force that is part of the divine life force energy that flows through the universe. Omega Light has a special power and characteristics because it comes from a higher source that exists in the universe. This higher source of Omega Light has tremendous healing abilities. It has tremendous abilities to be complementary to the biosphere and to all beings that live in the biosphere.